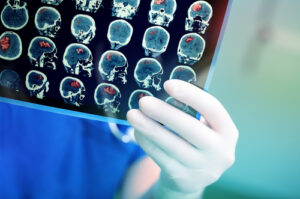 State and Federal agencies have expressed concern over a link between graduates of Colonia High School in Woodbridge, New Jersey, and a specific rare brain tumor cluster.

How the Link Was Discovered

The possible link was first discovered by Al Lupiano, a graduate of Colonia High School, after he and his wife, Michelle, were both diagnosed with a rare brain tumor called an acoustic neuroma. They were told that the odds of them both having this diagnosis were one in a billion. On the same day, his wife was diagnosed with acoustic neuroma, Mr. Lupiano’s younger sister was also diagnosed with a brain tumor, terminal glioblastoma. Mr. Lupiano told NJ.com that the odds of this “would be like three people getting struck by lightning on the same day.” Mr. Lupiano later learned of another Colonia area family which saw two sisters be diagnosed with rare cancerous brain tumors. After learning of these sisters’ diagnoses Mr. Lupiano, a health and safety administrator, dove into the mystery and found other Colonia High School graduates had received a similar rare diagnosis of acoustic neuroma, brain cancer, and meningioma brain tumors. After posting on a local Facebook group, others began to tell stories of themselves or their loved ones who had received diagnoses including several types of primary brain tumors, including cancerous forms like glioblastoma and non-cancerous yet debilitating masses such as acoustic neuromas, hemangioblastomas, and meningiomas. As of April 19, 2022 Mr. Lupiano has gathered the names of at least 110 graduates of Colonia High School with rare brain tumors.

Local, state, and federal agencies have expressed concern about the claim. The United States Environmental Protection Agency (EPA) said it has “received information about the community’s concerns related to Colonia High School and “will communicate with both the New Jersey Department of Environmental Protection and the New Jersey Department of Health as they investigate the matter.” The New Jersey Departments of Health (DOH) and Environmental Protection (DEP) stated “Our agencies are aware of the concerns raised by local residents, particularly as they relate to Colonia High School, and are partnering with Mayor John McCormac and Woodbridge Township to better understand the issue and determine whether any relevant environmental exposure concerns are present at the site.” The DOH and DEP said in a joint statement. “The Departments stand ready to assist Woodbridge in reviewing any environmental data it collects to determine appropriate next steps.” The Township of Woodbridge has contracted an environmental engineering firm to conduct an estimated month-long investigation into the brain tumors linked to the high school. The investigation is ongoing.

While the cause remains unknown, some have suggested that the cause may be a now-defunct Middlesex County, NJ sampling plant located about 30 minutes from the school which was an entry point for uranium ores, according to the U.S. Army Corps of Engineers New York Division. The plant received uranium, thorium, and beryllium ores between the 1940s and 1967. Per the Army Corps of Engineers website, “records later revealed that in 1948, some radioactively contaminated materials had been trucked from the plant to the Middlesex Municipal Landfill (MML), one-half mile away. In 1980[s], the contaminated residential properties were cleaned up, and the excavated soil was stored at the site in a specially constructed pile, known as the Vicinity Properties (VP) pile.” Some have theorized that the plant soil from the plant had been trucked to Colonia High School during its construction in the 1960s, according to NJ Spotlight. Others have pointed to a 1997 incident wherein a teacher uncovered a hazardous material on school grounds while demonstrating a Geiger counter, which measures radiation, to her students. This connection is being drawn because people who have been exposed to ionizing radiation have an increased risk of developing primary brain tumors, whether they are malignant or benign, according to the Mayo Clinic.

Common symptoms of those with Acoustic Neuroma include:

Common symptoms of those with Glioblastoma Multiforme include:

Common symptoms of those with Meningioma include:

Were You Diagnosed With Brain Cancer After Attending or Working at Colonia High School? Call Team Law For a Consultation

If you or a loved one attended Colonia High School or grew up in Colonia, New Jersey, and believe that you may have suffered an injury please contact our office to discuss your options. We are currently investigating these issues at Colonia High School and will keep you up to date on any new information. The skilled attorneys at Team Law represent clients who suffered personal injuries in Colonia, Avenel, Fords, Hopelawn, Iselin, Keasbey, Menlo Park Terrace, Port Reading, Sewaren, and throughout New Jersey. Call (732) 540-1394 or fill out our online contact form to schedule a free consultation about your case. We have an office conveniently located at 136 Central Ave., Clark, NJ 07066, as well as offices in West New York, Perth Amboy, Edison, Summit, Newark, New Brunswick, Orange, Plainfield, and Jersey City.