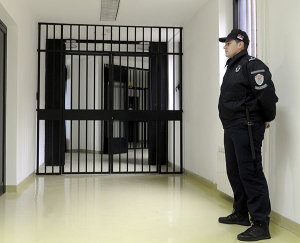 In response to a brutal attack of a correctional officer by an inmate at New Jersey State Prison, state lawmakers have introduced a bill which would give corrections officers full salary during their recovery period.
A corrections officer named Eligia Then was assaulted on Feb. 6 by an inmate. She suffered bruises to her neck from being choked, while also sustaining bruises on her right eye, her nose, cuts on her eyebrows and cheeks, as well as head injuries.
Currently, New Jersey officers must use sick leave and personal days in the five days after sustaining an injury on the job. Afterward, their worker’s compensation begins to kick in, where they receive 70 percent of their salary, until returning to work.
Under the newly proposed bill, corrections officers would be fully paid by their employers for the five days after their work injury. Subsequently, the employers would then subsidize the other 30 percent of the uncovered worker’s compensation salary, so that officers would receive full pay while injured. Currently, corrections officers are the only law enforcement officers in New Jersey who do not receive full pay while injured.
According to the Federal Bureau of Labor and Statistics, working as a corrections officer is one of the most hazardous jobs in government and law enforcement. A review of data from 2012, analyzing non-fatal occupational injuries which resulted in missed time from work, showed that state governmental correctional officers and sheriff’s patrol officers had at least 2.5 times higher incidence rates than any other law enforcement professional.
There were 11,340 (16 percent lower than the 2011 figure) such incidents reported among correctional officers in 2012, by far and away the most in governmental jobs, making up for 17 percent of the total.
The stats from the BLS, along with the most recent attack on Then (which left her hospitalized for four days), highlight the dangers correctional officers face on a daily basis in our prisons. The bill also represents a potential victory for New Jersey correctional officers who will have a chance to be fully paid while recovering from work injuries.
If you’ve been injured on the job, it may not be your fault, and you may be entitled to damages. Contact the employment law attorneys at Team Law today for a free consultation. Call Team Law at 1-800-Team-Law.